Work is nearing completion on the ground for the 8km route between Matlock and Rowsley. This work has been project managed and constructed by Derbyshire County Council with engineering design and supervisory support provided by AECOM Ltd.

Phase 1: Matlock (opposite the Arc) to Old Road, Darley Dale

The trail surface along the railway line from opposite the Arc Leisure Centre to behind the Red House Carriage Museum at Darley Dale is complete and included the repair of a significant length of retaining wall near Red House. The new section across farmland to join up to Old Road will be finished by the middle of December and will then be open to the public. This is a lovely new section and well worth a visit.

However there have been considerable delays in getting formal approvals for the link across the railway line towards the A6 and the Arc so Phase 1 cannot be officially opened for cyclists until these approvals have been finalised. It is open for walkers as there is still a public footpath that crosses the railway at this location.

There were unexpected delays in completing this section but the final link into the paths through the Whitworth Park was completed last week so this phase is now available for walkers and cyclists. This phase is surfaced with blacktop to tie in with existing paths.

The works on the trail and associated fencing was completed for this phase back in the summer and all that remains is to carry out some tree and hedge planting to replace the trees that were removed in order to construct the trail through the shelterbelt along the edge of Peak Rail’s car park.

All of the works were completed by the end of July which includes a 200m length of boardwalk made out of recycled plastic which was needed to minimise the impact on the wetland area that the route had to pass through. We had some teething problems with some faulty decking but this has been resolved with the manufacturer and the replacement boards are in the process of being fitted

The County Council has approved some money to continue with the design and planning work on the remaining 4km section between Rowsley and Bakewell. Negotiations are ongoing and the next stage is to liaise with landowners and relevant groups and organisations and work up more detailed designs. Once this section has been designed and received planning permission the Council will be in a stronger position to seek funding to deliver this section.

There is a way of using existing public rights of way to get from Rowsley to Bakewell without going on the A6 via a public bridleway and non-classified highway. We are currently looking at the feasibility of formally promoting and signing these as a temporary off road alternative until the main onward route along the line of the former railway is completed.

The 3km off road section linking Dale Head Road, over Staker Hill, around the line of the former railway and down to the Parks Inn pub in the centre of Harpur Hill is largely complete on the ground apart from the fact that we have had to temporarily stop the trail 150m short of the pub at the top of Fiddle Street while we carry out some final negotiations and design work over the line of the final section of the route. This means that this section will not be completed until Spring/Summer 2017

A signing scheme on minor roads through Earl Sterndale promoting the 6km White Peak Loop link connection between this new section and the top of the High Peak Trail is now in place. Follow blue ‘WPL’ highway signs.

Further negotiations and designs are needed to look at the continuation route beyond Harpur Hill to provide the connection to Grin Low, Buxton Country Park and the centre of Buxton. In the meantime the onward connection into Buxton from Harpur Hill will be via the Sustrans signed National Cycle Network 68 route which is part of the Pennine Cycleway

Buxton out to the Monsal Trail:

The safety improvement works on the Wyedale section of the Monsal Trail between Topley Pike and the western end of the trail are complete. Discussions have been held with officers from High Peak Borough Council over the next stage to connect the route into the centre of Buxton.
_________________
'I thought of it while riding my bicycle' - Albert Einstein on the theory of relativity
'Every time I see an adult on a bicycle, I no longer despair for the future of the human race' - H.G. Wells. 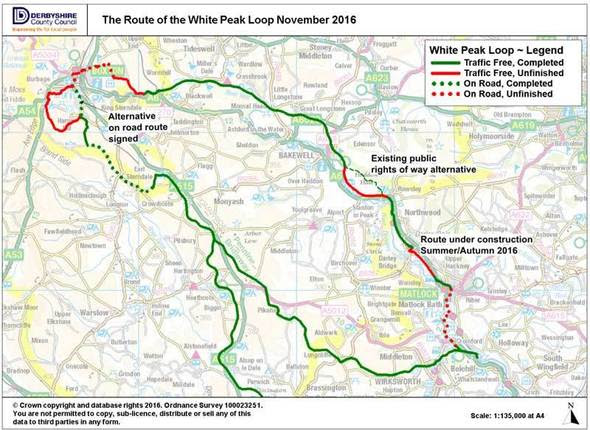